Sharon Astyk wrote a very interesting post a couple of weeks ago about Reconsidering Cities. It got me to thinking about whether the right decision for us is a few acres outside a small country town or a large house block in a medium-sized city. We go back and forth on this question very regularly, so today I’d like to spend some time determining the pro’s and con’s of each option.

I apologise in advance if this is not at all interesting to anyone but me, but it’s been something I’ve been thinking about for a while. If you do happen to have some thoughts that I’ve missed, I’d appreciate if you could leave me a comment.

This thought process is part of our five-year plan. For the next five years we intend to keep working, saving money and maybe starting a family. We also intend to keep working on our self-sufficiency plans and making our vision become a reality. OK…onto the two options I can’t seem to decide upon.

1. Adapting in the City

There is really only one city I’d be interested in living in permanently when I return to Australia. Here are a few statistics to put it in perspective.

It’s very much a government town, with much of the population well educated and well paid.

My vision for adapting in the city 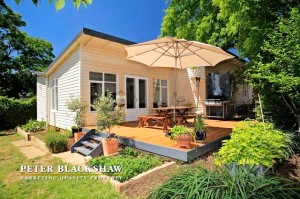 We’ll be living in a small house (2-3 bedrooms) which is likely to be a post-war brick or weatherboard ex-government house. We’ll be on a block that’s about 500-600m² (5300-6500ft²) which is in the inner city area (within 7km drive of the city centre). We’ll be within walking distance of local shops, restaurants and cafes and can cycle to most places within the inner core of the city because it’s extremely bike friendly. We’ll have made our property as sustainable as possible given the climatic conditions:

Most people require a car to live here, but the design of the city is such that small ‘townships’ have been developed to cater to residents. Each neighbourhood has at least a local store  and it wouldn’t be too difficult to ‘relocalise’ much of the population. Farmers markets and food co-ops are already up and running and bus transportation is available. 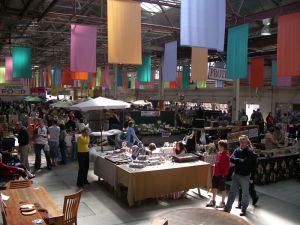 Because it’s a reasonable sized city, I imagine we’ll find plenty of like minded friends in the community and will find many opportunities to get involved with sustainable solutions to the issues of peak oil and environmental degradation. There is a fabulous weekly market where local people can sell their home-made products and home-produced food. There is plenty of culture with fantastic museums, art galleries and theatres. There are a lot of parks and recreational areas throughout the city, making it easy to get out into nature regularly. There are plenty of hiking and mountain biking trails all over the place, making it ideal for us.

Both Brendan and I will be working part-time jobs. I imagine I’ll be working in some type of government agency which deals with the environment or energy. Between us, we will probably be running a couple of home based businesses. With a population of young government workers, the disposable income in this city is likely to remain higher than what could be expected in other parts of the country. This would make this city a good place to operate small service-based businesses with low overheads.

Because of the high cost of living in this city, we’ll have to maintain an income within the real economy to pay for the mortgage, food, transport and services. We will not have a tremendous amount of free time available to become self-reliant, so we’ll be relying more on a large community over an extended area for food and services.

Pros of adapting in the city

Cons of adapting in the city

2. Adapting in the country

The town we are considering is Brendan’s childhood hometown which is located on a plateau at the top of a mountain range.

My vision for adapting in the country

We’ll be living in a small home (2-3 bedrooms) which is likely to be an old weatherboard house. We’ll either be on a large block (1/4 – 3/4 acre) within walking distance of town or we’ll be on a few acres less than 10 km out of town.  If we are in town we’ll be within walking distance of local shops, schools and a couple of restaurants and cafes. We’ll have made our property as sustainable as possible given the climatic conditions:

The local community is quite well set up and all the essentials are available for purchase in town. Some of the businesses are resupplied by traveling salesmen, which seems a quaint reference to a bygone era.  If it’s not available in town, we’d have to drive one hour to the coast or one hour inland to a small city. A local bus goes to the coast once per week for the day. The region is extremely fertile and plenty of food is being grown locally, although I’m not sure that a local food movement is up and running formally yet.

It’s a small town and much of the population is elderly. While this may be good for learning skills from our elders, I’m a bit concerned about the viability of a town with such a small proportion of young adults. This situation may change as more people become aware of the need to adapt to a changing world.  On the plus-side, the town at the bottom of the mountain has a thriving cafe and arts scene with many local people already living ‘alternate’ lifestyles. The shire is already part of the transition town movement and I can imagine that we could get involved and bring much of that activity up the mountain.

As you can imagine with all that rain and sunshine, the town is surrounded by green, rolling hills and national parks. The town itself has retained much of its original character and hasn’t suffered too badly from modern times. In fact the local bakery still uses a wood-fired oven and the Gazette is the last Australian newspaper printed by the letterpress method. Apparently it’s the last independent newspaper in Australia.

The town is currently very reliant on vehicles to bring everything in from the coast or via the inland route. Occasionally the mountain will be cut off for a week due to flooding of the waterfalls. The train line closed in 1972, but I imagine it could get back up and running under the right set of circumstances. There is still an active group of residents who are doing some fantastic work to preserve railway vehicles and the equipment of a bygone era.

Because there aren’t many options for employment in town, I imagine Brendan and I will both end up working at a variety of things such as in local businesses, working at home and volunteering in a variety of ways.

We should be able to afford to purchase our home outright and with a small income from investments, we could be financially independent to the point that we can choose the type of work we partake in. We’ll have time to grow some of our own food. We can also get involved in self-sufficiency on a community level.

Pros of adapting in the country

Cons of adapting in the country

I just can’t decide which option is for us

I need some new perspectives. Have you chosen one over the other and regretted it or do you love how you live? What do you see the future becoming, and what would you choose if you were in our position?

Thanks for any comments you wish to provide.