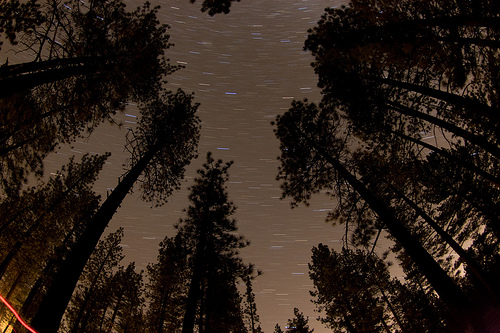 This weekend Brendan, Zoe dog and I went backcountry camping up in the mountains with some of Brendan’s climbing buddies. We found a fabulous little clearing surrounded by boulders and pine trees and enjoyed being outdoors for the weekend. Brendan enjoyed some climbing and Zoe and I hiked in with them one day to watch and then spent the next morning back at camp where I read and Zoe kept an eye out for squirrels. It was quite cold at night and even with two layers of thermals, a polarfleece jacket and two sleeping bags, I was still cold. I think it’s about time I invest in a good cold weather sleeping bag. Despite the cold it was lovely sleeping out in the wild. We were awoken a couple of times through the night by the howling of wild coyotes. You don’t get that in the city.

On our hike from the climbing area to where we would set up camp for the night, we lost one of our party members. She ducked off to attend to the ‘call of nature’ and then we didn’t see her again. We backtracked to where we last saw her. After 20 minutes with no sign of her, we decided to head back to where the cars were parked, assuming she would make her way back to them. Unfortunately there was still no sign of her back there so we started getting worried, imagining that she had either been attacked by a bear, tripped and hit her head or been bitten by a deadly snake. As it was already dusk we decided to split up and go in search of her and meet back before dark. I waited at the meeting spot in case she found her way back while the guys headed off in different directions. Finally, just before dark descended completely she arrived back at the meeting spot in an unfamiliar car. All was well. She had just got turned around while out in the bush and ended up walking in the wrong direction. Luckily she eventually came across a dirt road which by chance some friendly climbers were driving along. I can’t imagine how many ways this could have ended badly.

This experience certainly made me think about a few things. What if she hadn’t found a road and come across someone to bring her back?  By the time we were hiking back to camp I was out of water. I hadn’t kept any aside because it was a reasonably easy trip back. Was she in the same situation? Did she have any water left? Also, it got down to near freezing during the night. Would she have tried to find somewhere sheltered to stay the night, or tried to keep walking in the dark? It just goes to show that even a seemingly innocuous outing could turn into a survival situation very easily.