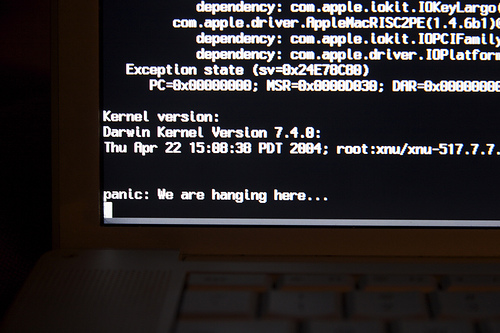 First of all….let me say Wow! Thanks to everyone for the illuminating discussion on my previous post. I’m still digesting all of your comments and haven’t had the chance to add my two cents worth yet because today has been ‘one of those days!’ Prepare for me to vent.

On Friday my work computer came down with a symptom I like to call The Blue Screen of Death. It was taken away to whereabouts unknown and then returned to me today. I eagerly booted it up, keen to recover the ever so important essay I had been working on like a crazy woman for the last few weeks. It was at that point that I discovered that everything is gone….lost….deleted. I could have cried (in fact I might have a little). I’m ok (sort of) losing the everyday work stuff because I can ask people to resend me everything I lost. I am however, devastated to lose the essay I had put long days into researching. All that research is gone and I have to start again.

So….. I lost all the data on my computer. Nobody died. I didn’t lose a limb. A piece of technology failed me…..That is all. So why did I react like my world was coming to an end?

This got me to thinking.

How would we react if a foreign country denied us access to oil? How would we get food from the supermarket if the trucks don’t come? How do we get to work to earn our money if we can’t fill the tanks of our cars?

It got me to thinking….How will we (as a society) cope when systems begin to fail?