Avebury is the site of a large henge and several stone circles surrounding the village of Avebury in southern England. Aged at about 5,000 years old, Avebury is one of the largest Neolithic monuments in Europe. It is even older than the more famous Stonehenge which is 32 kilometres (20 mi) to the south.  Comparable sites of a similar date are only a quarter of the size of Avebury.

Avebury’s existence indicates that a stable agrarian economy had developed in Britain by around 4,000–3,500 BC.  There were originally 98 standing stones, some weighing in excess of 40 tons. Many of the original stones were broken up or removed from the early 14th century onwards at the behest of the Christian Church to remove the association with pagan rituals, to make room for agriculture, or to provide local building materials. Only 27 stones of the Outer Circle survive.

The best thing about Avebury is that is hasn’t become a complete tourist attraction like Stonehenge. Brendan and I were able to quietly wander through the stone circles and imagine what life might have been like those many thousands of years ago.

What was even more interesting is that a village has been built within the stone circles. We had lunch at the pub to warm up and for me to recuperate from slipping on the icy cobblestones. Thankfully my pride was wounded more than my backside. I think that yellow warning sign in the picture was meant to indicate that walking through there might be precarious. Don’t you love the thatched roof?

Also on site is the Avebury Manor and Garden which is a National Trust property consisting of an early 16th-century manor house and its surrounding garden.

The present buildings of the house date from the early 16th century. Ancient walls and clipped box hedges contain the ‘rooms’ of the garden. 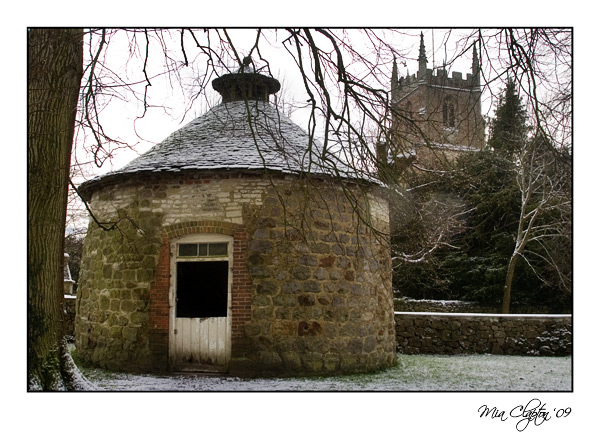 As you can see from the photos, it was a gloomy day when we visited Avebury, but personally I think it added to the mood of the place. With the little village home to only about 400 people I found it a very quiet and quaint little place; the sort of village you imagine finding in southern England.

In the afternoon we visited Stonehenge, but after Avebury I was a little disappointed. A huge chain link fence surrounded the site which was swarming with tourists. You could not walk among the stones like you could at Avebury which I think ruined (pardon the pun) the experience. Nonetheless I’m glad we got to witness these ancient wonders while we were in England.

Check out more photos from my travels.