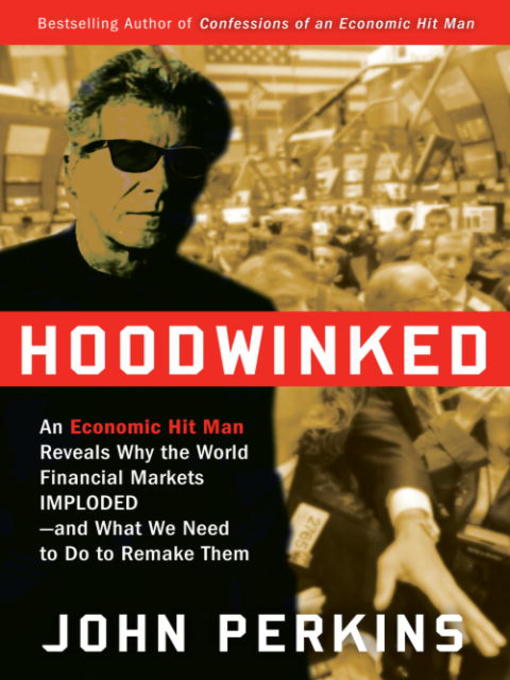 Hoodwinked: An Economic Hit Man Reveals Why the World Financial Markets Imploded–and What We Need to Do to Remake Them

John Perkins has seen the signs of today’s economic meltdown before. The subprime mortgage fiascos, the banking industry collapse, the rising tide of unemployment, the shuttering of small businesses across the landscape are all too familiar symptoms of a far greater disease. In his former life as an economic hit man, he was on the front lines both as an observer and a perpetrator of events, once confined only to the third world, that have now sent the United States–and in fact the entire planet–spiraling toward disaster.

Here, Perkins pulls back the curtain on the real cause of the current global financial meltdown. He shows how we’ve been hoodwinked by the CEOs who run the corporatocracy–those few corporations that control the vast amounts of capital, land, and resources around the globe–and the politicians they manipulate. These corporate fat cats, Perkins explains, have sold us all on what he calls predatory capitalism, a misguided form of geopolitics and capitalism that encourages a widespread exploitation of the many to benefit a small number of the already very wealthy. Their arrogance, gluttony, and mismanagement have brought us to this perilous edge. The solution is not a “return to normal.”

We can create a society that fosters a just, sustainable, and safe world for us and our children. Each one of us makes these choices every day, in ways that are clearly spelled out in this book.

“We hold the power,” he says, “if only we recognize it.” Hoodwinked is a powerful polemic that shows not only how we arrived at this precarious point in our history but also what we must do to stop the global tailspin.

I highly recommend this book to everyone. John Perkins does an exceptional job of guiding you through the troubles and atrocities that the corporatocracy has placed on the entire world through greed and deception. It is time to change the status quo if we are to provide a sustainable future for those generations to come.

In this book, Perkins tells of his experiences as an Economic Hitman.

Economic Hit Man – A highly paid professional who cheats countries around the globe out of trillions of dollars, funnelling money from the World Bank, the U.S. Agency for International Development and other foreign aid organizations into the coffers of huge corporations and the pockets of a few wealthy families who control the planet’s natural resources. Their tools include fraudulent financial reports, rigged elections, pay offs, extortion, sex and murder. ~ Urban Dictionary

Perkins also links the policies and philosophies of short-term (so-called ‘mutated’) capitalism to the negative economic effects currently unfolding in the American economy. This book is not all doom and gloom though. A substantial portion offers policy and philosophical advice aimed to stem the downturn.